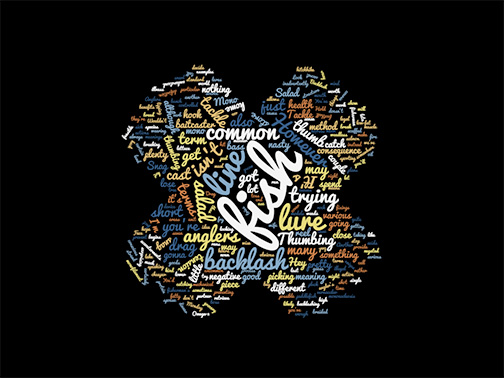 Anglers are a unique breed. Face it, it would be a heck of a lot cheaper just to buy some fish from the grocery store. In fact, many anglers just let the fish go when we do catch them. In short, our actions don’t always make a lot of sense. It’s not surprising, then, that we’ve got plenty of common fishing terms that mean something a little different than the common vernacular. Here are seven examples of terms only fishermen understand.

This has nothing to do with trying to hitchhike to a secret fishing lake, although that would work too. Thumbing means a couple different things to anglers. Look at any good bass angler’s thumb and you’re likely to see it scuffed up from thumbing so many fish. Thumbing – or lipping – is a common way to land bass. You might also thumb the line on your baitcaster to stop a cast short of a tree. You’d thumb it again to provide a little tension when a fish runs to prevent the line from backlashing.

Hey, speaking of backlash, the fisherman’s version isn’t quite the standard definition of the term, which would be something like a negative consequence for an action. However, if there isn’t enough tension on your baitcaster when you fire a cast, or if you try to muscle a cast into the wind, you’re certainly going to get a nasty snarl of fishing line and you’re going to spend plenty of time picking out your backlash. I guess that IS a negative consequence. And if you spend an hour picking out a backlash and show up late for dinner, there will be some serious backlash with your spouse when you get home.

“Mono” is short for monofilament, as in a single strand of fishing line, rather than a braided fishing line. It has nothing to do with mononucleosis, which is a nasty illness. However, it may be feasible to call in sick on Monday and tell your boss you’ve got a bad case of mono. Hey, it’s worth a shot.

All anglers are health conscious because fish are not only a good source of low-fat protein, but they’re also high in Omega-3 fatty acids. Of course, the health benefits are pretty much negated if you decide to fry your fish in oil. “Salad” isn’t a bunch of lettuce and other fixings we have with our meal of fish. It’s a term meaning weeds, as in “I’m gonna toss this weedless lure right up into the salad.” Another common fishing use of “salad” would be: “Hold the salad, I’m gonna have another piece of fish."

In fishing terms, your drag is a mechanical device on a reel that allows a fish to run and peel line in a controlled manner, thus preventing the line from breaking, while wearing the fish out. Your wife may also have to “drag” you out of a sporting goods store after looking at various reel models for hours on end.

Tackle isn’t just a football term. This is a pretty common and obvious fishing word, meaning fishing lures and various fishing accouterments. However, if you have a particular hot lure that is catching all the fish and you lose it, it’s not uncommon to “tackle” your fishing partner as he tries to pluck the last lure of its kind out of your tackle box.

“Snag” has a couple meanings in the fishing world. As a verb, it is a method of trying to hook a fish somewhere other than in the mouth, which in many cases is illegal, although in certain areas, it is a legal method for taking species such as paddlefish or salmon. As a noun, a snag is a piece of structure anglers sometimes hook inadvertently while trying to catch fish. It’s a wise idea to get your lure as close to cover as possible, but getting it too close causes a backlash in your plans. Then begins the process of trying to retrieve your tackle from the salad. You’ve got to hope your mono doesn’t break, or you’ll lose your lure. However, if that snag turns out to be a rock and you hit it with your lower unit instead of your fishing lure, you may be thumbing your way home. Wouldn’t that be a drag!