The key to catching bluegills all year long is knowing where to find them. Here's a breakdown of the hows and whys of seasonal bluegill movement and location.

Spring is bluegill time. At late ice, bluegills often return to the shallows, which receive an influx of oxygen as melting snow drains into the lake and the sun’s rays begin to penetrate through the thinning ice.

After the ice melts, bluegills can be challenging to find. Look for them in their same shallow, late-ice haunts, but if they’re not there, check adjacent deeper points and flats. Bluegills may move shallow during warming trends but retreat to deeper water during a cold snap.

Although dark-water lakes warm faster in spring, clear lakes develop earlier weed growth, due to better light transmission. Look for early weed growth to find early spring ’gills. Shallow, protected bays on the north end of the lake will warm the fastest because this location receives the most direct sunlight. If your sonar has down imaging or side imaging, you’ll be able to see early weed growth on your fish-finder. The best fishing in early spring will occur after a few days of stable warm, sunny weather. The shallows will be warming, plants will spring up and there may be increased “bug” activity.

Bluegills spawn when the water temperature reaches about 70 degrees. At this time, they move into shallow water – often 3 feet or less. Males fan out a saucer-shaped nest where females will lay their eggs. These nests are usually easy to see if there’s good water clarity. Bluegills are very vulnerable when they’re on their beds. At that time, the largest bluegills in the lake will be right under your nose and catching them is as simple as dangling a small jig, worm, leech or fly right in front of them. Males guard the nest and will strike anything they perceive as an intruder. Because large bluegills are so susceptible at this time, please practice catch and release, or at least take only a few fish. The future of the fishery depends on it.

Summer
Soon after spawning, female ’gills leave their nests, leaving males to guard them. Big female bluegills will be hungry at this time. Look for them in weeds, lily pads or brush not far from their spawning sites, probably in slightly deeper water. Males will still be on their nests until after the eggs hatch.

In summer, with their spawning duties complete, bluegills can be found anywhere there are weeds. While you can catch a ton of bluegills right from your dock, generally, the fish you catch in shallow water tend to be small. The larger bluegills may head for deep weedlines or even mud flats, depending on what’s hatching on soft-bottomed areas. Big bluegills are most easily taken on jigs with soft plastics or worms. Flyfishing in the evening can be a fun and effective way to catch them, particularly if they are already rising to some sort of insect. However, for the most part, think deeper water for the largest summer ’gills. 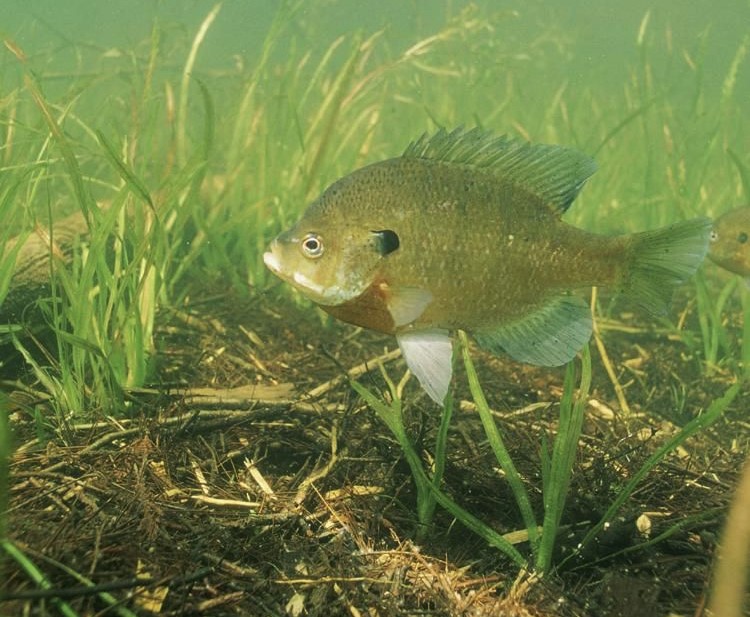 In summer, look for larger bluegills near deeper weedlines

In addition to deep weed edges, you can also find fish around fish cribs placed in moderately deep water. Some bluegills may also suspend over the lake’s deep hole at the thermocline. These open-water ’gills tend to be large. Target them with a slip bobber and a worm to get the right depth.

River backwaters can also hold good summer bluegill fishing. Look for slack-water areas in side channels or backwaters, often only a few feet deep. If you can find weeds in these areas, you’ll likely find bluegills. A little inflowing water from a feeder stream or culvert doesn’t hurt, either. Fallen trees and stumps also hold river bluegills.

Fall can provide some fantastic fishing opportunities for those who seek them. Fall is a season of change, and bluegill anglers will have to be adaptable to find autumn fish, but if you can find them, they should be willing to bite. Begin your search in summer locations: deep weed edges. Often fish will still be holding there. If they’re not there, you will have to hunt around. If weeds remain green, they may be up inside the weeds. However, often, at some point bluegills go deep. Look for them along outer weed edges, on soft-bottomed flats or even over the lake’s deepest hole, right in with crappies. They may be suspended, so use your electronics to learn what depth to fish.

Fall river fishing can be excellent. Shallow, weedy backwaters will hold fall ’gills and they will be on the feed. Small jigs with plastics or live bait, fished with or without a bobber, should produce. 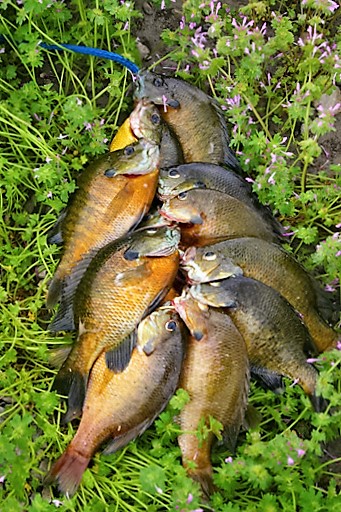 Panfish location changes throughout the winter months. At first ice, look for shallow bluegills right up inside green weeds. When the ice is only a few inches thick and clear, you can sometimes see remaining weeds. Otherwise, you’ll have to rely on your flasher. Making a scouting trip right before freeze-up isn’t a bad idea. At that time you can still cover a lot of ground in your boat and your electronics will show you remaining weedy areas. Mark these spots with your GPS so you know where to fish when ice forms.

First-ice bluegills are generally willing biters if you can find them, but they tend be more finicky in winter. Whereas catching fish all day isn’t much of a problem during the open-water season, now, the bite will be noticeably better at dawn and dusk.

In winter, you’ll want to downsize everything to fool fussy fish. Line in the 2- to 4-pound range is ideal, although going toward the light end of that spectrum is better. You’ll want to use micro-sized ice-fishing jigs as well. Horizontally oriented lures are probably a better overall choice than vertical lures. How do you know if the lure fishes vertically or horizontally? If the hook is straight and the eye is at the top, such as a classic teardrop jig, it’s a vertical lure. If the hook is bent 90 degrees near the eye like a standard leadhead jig, it’s going to fish horizontally. However, make sure when you tie on your jig – and after every bite or snag – that you slide the knot to the center of the eye of the hook on a horizontal jig, otherwise it won’t hang horizontally. You can lower the lure into the water and see for yourself how the jig hangs.

Tip your jig with a waxworm, a spike (or even several spikes) or soft plastics. The scent of live bait effectively draws strikes, but the lively action of a limp soft plastic does the trick as well.

Ice fishing rods should be sensitive to detect bites, but have enough backbone to set the hook. A spring bobber is a great aid in detecting bites. There are several styles available, but generally they are an after-market wire device that attaches to the end of your rod. They will dip at the slightest bite. In fact, they will actually rise up as the weight of the jig is lifted if the fish grabs your bait and immediately swims up with it. Some rod companies are now making rods with built-in spring bobbers.

Most ice-anglers use spinning reels, but the trend in recent years has moved to flyfishing-style reels. The reason is simple: spinning reels twist your line when you retrieve your lure. Fly reels don’t. When your line twists, your jig spins, which looks unnatural to fish. Drop your jig in the water once and watch how it spins. In shallow water, you can watch fish react to the presentation. They often have to wait for it to stop spinning before they bite. Adding a swivel a foot above your lure can help somewhat, but the jig still tends to spin.

At first ice, fish right down in the weeds or slightly over the tops to get attention, although you’ll probably have to fish near bottom to elicit strikes. The first-ice bite is good and usually lasts for about a month or a little longer.

As the ice thickens, things change. Reduced light penetration causes plants to die. Then, instead of producing oxygen as a byproduct of photosynthesis, the decaying process actually uses up oxygen. Then, bluegills will be forced to vacate their first-ice locations and head for deeper water.

In mid-winter, look for ’gills in deeper water. Try soft-bottomed flats where they feed on insect life. Sometimes they will suspend over deep holes, just like crappies, feeding on zooplankton. Your electronics will go a long way toward helping you find them. In mid-winter, bluegills are finicky. You’ll need to fish them at evening and sunrise, just like walleyes, for the best bite. A sonar unit is paramount to success. You can watch how fish react to your presentation. Mid-winter fish are notorious for swimming up to your bait, checking it out, and then just leaving for no apparent reason. Watch how fish react to your jig and then mix up jigging style and cadence, jig size, bait and even lure color until you find something that works. Often the best approach is to just move and find fish that are more willing to bite.

In late-winter, the process reverses. The influx of melting water and oxygen into the lake energizes fish and brings them back into the shallows. Look for them back in their first-ice haunts. Bulrush beds in just a few feet of water can be good bets. At late-ice, bluegills should be biting again, providing some great action.